We’ll keep you updated with the latest Crohn’s and colitis news and knowledge.

Though surgery for Crohn’s disease is a last alternative, it should be considered an important part of the overall treatment when needed. Approximately three of every four people with Crohn’s will have at least one surgical procedure during their lifetime. About half of those will undergo another surgical procedure at some future point. Though surgery is not a cure for Crohn’s disease, many people find that their quality of life improves significantly following surgery. 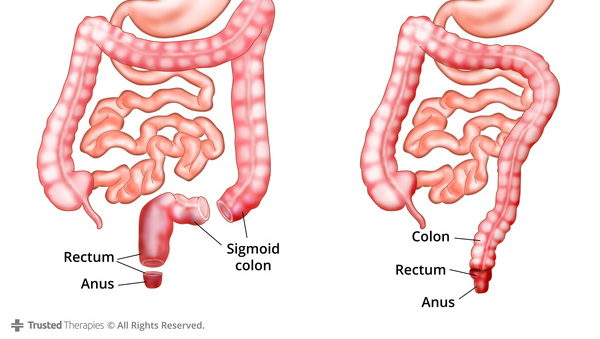 Surgery for abdominal/intestinal Crohn’s disease is most commonly recommended when there is significant bleeding, bowel blockages (obstructions), a perforation or hole in your bowel, or cancer. Surgery may involve removing a portion of the intestine that is inflamed or in some cases involves removing an entire organ such as the colon (large intestine) or rectum. The main goal of surgery for Crohn’s is to remove the diseased portion while saving as much of the bowel as possible.

Types of Surgery for Crohn’s Disease

There are four types of surgical procedures used to treat the symptoms of Crohn’s disease. The type used will depend on the specific complication, the location in the gastrointestinal tract and the severity of the symptoms. These surgical approaches include:

Resection This surgical procedure removes a part of the intestine and is the most commonly performed procedure. After one or more select sections of the intestine are removed, which are usually identified through pre-operative investigations, the remaining healthy sections are put back together. Once the diseased portion(s) are removed it may provide many years of relief from the common symptoms associated with Crohn’s disease. If symptoms do recur, it typically appears at the point where the sections of intestine were joined.

Proctocolectomy
If both the colon and rectum are diseased, it may be necessary to remove both in a procedure called a proctocolectomy. This may be done in one operation, or in stages. The surgery can involve bringing the ends of the small intestine through an incision in the lower abdomen (called a stoma) so that waste can empty from the body into an external bag (pouch). 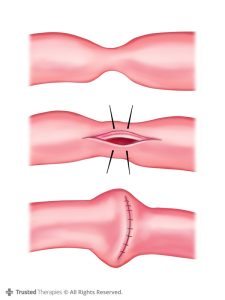 Strictureplasty
In situations where multiple segments of intestine are inflamed or damaged by Crohn’s disease, a special procedure called a strictureplasty can be performed to widen portions of the intestine that have narrowed (or become constricted) due to the buildup of scar tissue over time. This accumulated damage occurs from the repeated process of inflammation and healing. The surgery involves making a cut lengthwise along one side of the intestine where narrowing has occurred and suturing the ends widthwise.

This shortens and widens the bowel and eliminates the stricture. Because inflammation from Crohn’s can occur at various places in the bowel, strictureplasty can be performed at multiple places during the same surgery without the need for removing (resectioning) portions of the bowel. This procedure is reserved for patients who may be at risk of having too little bowel, called “short gut,” if a significant portion of affected bowel is removed.