As previously discussed, diet can play a major role in the management of Crohn’s disease and ulcerative colitis. With so much information currently accessible to us, it can be difficult to filter through diet trends that you might hear or read about. The following summarizes the most popular diets out there that have claimed to help others with Crohn’s and colitis, and highlights which ones may be more worthwhile to try under the guidance of a registered dietitian or physician.

As previously discussed, diet can play a major role in the management of Crohn’s disease and ulcerative colitis. With so much information currently accessible to us, it can be difficult to filter through diet trends that you might hear or read about. The following summarizes the most popular diets out there that have claimed to help others with Crohn’s and colitis, and highlights which ones may be more worthwhile to try under the guidance of a registered dietitian or physician.

We’ll keep you updated with the latest Crohn’s and colitis news and knowledge.

This diet was first developed by Dr. Sidney Haas as a way to treat celiac disease. It was made more popular for the treatment of Crohn’s disease and ulcerative colitis by biochemist Elaine Gotchall through her book Breaking the Vicious Cycle.

The Specific Carbohydrate Diet limits most carbohydrates from the diet except for monosaccharides (glucose, fructose, and galactose), with the rationale being the single molecule structure of monosaccharides allows them to be easily absorbed into the intestine wall. The diet proposes that complex carbohydrates are not easily digested and therefore feed harmful bacteria in our digestive tract causing them to overgrow producing by products and inflaming intestine wall. The goal of the diet is to “starve out” harmful bacteria and restore the balance of bacteria in our gut (Gottschall, 2012).

There is currently limited scientific evidence for the Specific Carbohydrate Diet and its use in the management of Crohn’s disease and ulcerative colitis. Claims are based on theories and clinical practice.

Due to the limited scientific evidence available to support the health claims of the Specific Carbohydrate Diet, it cannot be fully endorsed for patients with Crohn’s or colitis until more research has been done. However, there are certain good aspects about the diet which may help provide symptom relief – especially cutting out refined carbohydrates. If you choose to try it, it is important to maintain a balanced diet and not eliminate all starchy foods as this may put you at risk for energy and nutrient deficiencies, and worsen your energy levels.

This diet was developed by gastroenterologist Dr. Peter Gibson and registered dietitian Dr. Sue Shepherd. It was intended to decrease functional gut symptoms such as gas, bloating, distention and diarrhea and/or constipation commonly seen in people with irritable bowel syndrome.

FODMAP stands for fermentable oligosaccharides, disaccharides, monosaccharides, and polyols – which are all different types of short chain carbohydrates that are poorly digested in the small intestine and rapidly fermented by gut bacteria that naturally reside in the large intestine, resulting in symptoms such as gas, bloating, diarrhea and/or constipation. The low FODMAP diet eliminates foods that are high in short chain carbohydrates in order to decrease symptoms.

The low FODMAP diet is strongly recommended for patients with Crohn’s disease or ulcerative colitis who also experience gas, bloating, distention and diarrhea. However, it will not treat inflammation that comes with the disease, and therefore is not recommended to replace medical treatments but instead used in conjunction with medical treatments prescribed by your physician.

This diet was introduced by a gastroenterologist, Dr. Walter L. Voeglin. It has been made more popular by Dr. Loren Cordain and was initially designed to optimize health, minimize risk for chronic disease, and achieve weight loss.

The theory behind the Paleo diet is that the digestive tract is not able to handle foods in our diet that resulted from modern agricultural methods, and that these foods result in modern diseases. This diet emphasizes intake of lean meats and plant-based foods, and to avoid consumption of grains and legumes (Eaton, 1985). A large portion of energy intake is supposed to come from protein and fat instead of carbohydrates as a major energy source. The Paleo diet is based on assumptions of our evolution, and therefore, has no specific claims about the effect of this diet on Crohn’s or colitis.

There have been no scientific studies done on the benefits of the Paleo diet for the management of Crohn’s disease and ulcerative colitis.

The Paleo diet is not recommended as there is no scientific evidence supporting its use for managing Crohn’s and colitis as there are major restrictions placed on dietary intake that may result in nutrient deficiencies, low energy intake, and further weight loss. Due to the emphasis on animal protein and fat in this diet, it also puts individuals with Crohn’s or colitis at risk of developing further health conditions in the long term such as high cholesterol, high blood pressure, and cardiovascular disease or stroke.

Do you have Crohn’s or ulcerative colitis? 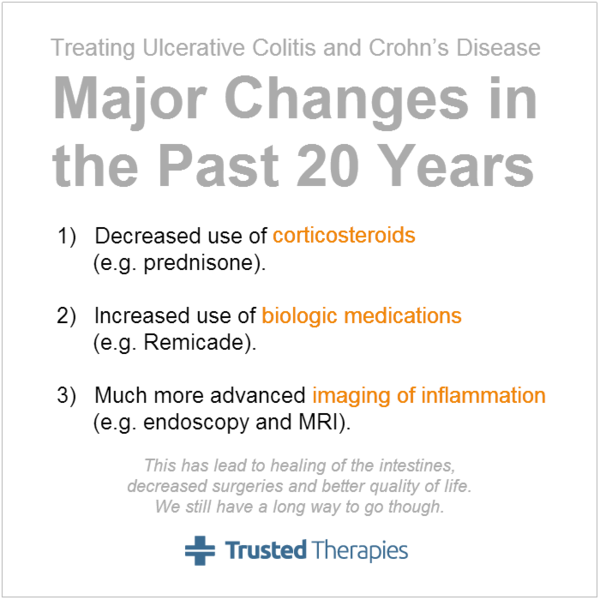